How to Install Proper Frost Footings for a Deck Written by My Home Handyman

Be the first to receive inspiring content from DIY to Design.

A deck can be a beautiful addition to any outdoor space. It can mean providing seating, hangout space, and a nice aesthetic that can tie the yard together. But like anything else, it has to be built properly so that it is both stable and safe.

One of the most important aspects to building a deck is ensuring that it has proper frost footings. There is a frost line which is the deepest point at which the soil is expected to freeze. The bottom of the footing needs to be buried below that line in order to provide stability for the deck. Depending on where you live, there are most likely ordnances that declare a frost line for standard decks.

Installing Frost Footings for a Deck

The good news is that the process of installing proper frost footings is relatively straightforward. All that you need do is dig deep enough and pour the footings so that they are past that frost line. When set properly, they won’t move (also known as heaving) when the ground freezes or thaws during the season changes.

This is your guide for how to properly install those frost footings so that your deck remains on sound footing no matter the time of year.

Step 1: Get the Tools

Just like any other job, it helps to have all of the proper tools before beginning. For this job, you will need two materials: concrete and a form tube. In addition, you will also need a posthole digger, spade, tape measurer, hoe, utility knife, and wheelbarrow.

The cost of the materials depends on the quality. While it can be all too easy to go with the cheapest option available, just remember that you get what you pay for. Still, you should be able to get a quality concrete without breaking the bank.

This is perhaps the most crucial part. If your deck posts tend to move up when the weather chills then back down again as it warms, this is known as “frost heave-osis.” The thing to remember is that, while the frost line is deepest point in which the soil will freeze, that can change depending on location.

For instance, in a warmer state like Missouri, that frost line might be a foot. But in a place like Minnesota, the frost line would be 42 inches.  The key is to ask the local building department when you get the permit to build your deck.

Be sure to ask what the required shape and size of the footings are as well. From there, you can dig the footing holes so that the bottoms are either at or just below the required depths.

This part can depend on the depth of the project. If you are pouring a couple of footings, then doing so on your own is probably fine. But if you plan on pouring more than a few, going with a premixed concrete from a ready-mix company is the way to go.

Mixing concrete on your own can result in far more bags than you may have realized. All of which has to be mixed by hand and used to fill the form tube. You can figure the volume of the concrete by multiplying the post and column height in feet by the tube’s radius in feet squared times 3.14. Then, divide the total by 27 in order to get the cubic yardage that you will need. Make sure to add for wide footing bases.

This is the most crucial point of the entire installation. When you have talked to the local building department, you know where the required frost depth is. It is vital that you dig to that depth and pour accordingly.

If the concrete is poured above the required depth, then the footing will heave when the weather changes. All that work will be for naught and you will have to start the process over again.

You can also pour just enough to create the footing below the frost depth. From there, the deck post can be set into the footing, with the majority of what remains underground coming in contact with the dirt. Just remember that even if you go for the latter, the concrete still has to extend below the frost line.

Tips for Lining the Footings Up

From there, temporarily support the other end of the joists using a piece of lumber; just make sure that the joists are level. Then, nail the outermost rim joist to the ends of the joists that would extend from the house. You now have the outline of the deck complete.

It is important that the frame be both level and squared. When it is square, you can drop a plumb bob at the corners to establish the points at ground level. Using the reference points, you can locate the footer locations easily, digging out the holes using a fence post tool.

Determining the Diameter of the Footing

It is important to know the load of the deck, which means creating concentrated loads in the soil. Even the smallest of decks can run 10,000 pounds or more. For decks with a ledger board and two support posts bolted to the house, those will hold 25 percent of the total weight.

What does this mean? Well, the soil under each deck footing will need to support roughly 3,000 pounds or more. While the porch load is the variable at play here, the diameter should range between 8 and 24 inches. The larger the diameter, the more spread out the weight will be over the soil area.

Ready to refresh your home?

Request Your Free Estimate
← Prev: 10 Best Types of Tiles to Choose When Designing Your Dream Bathroom Next: 8 Design Ideas for Your Next Exterior Home Renovation → How to Picture Frame a Deck

When we think of decks, it is safe to say that most of us picture something with steps and railings. But that is just... A tile backsplash can be a great way to add a little personality to a kitchen. Mosaic tiles can make that even easier... Whether you have a designated space for a home office or simply a corner in the living room or bedroom - you deserve... 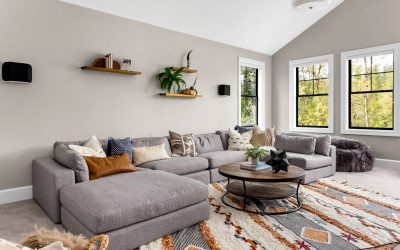 10 Tips for Using Rugs to Decorate a Space

Rugs have the potential to make or break your space. Adding a rug can create a cohesive and cozy appeal while binding...